Throughout the length and breadth of the candy makers’ art we find products in use that contain the five dietary essentials; carbohydrates, fats, proteins, minerals and vitamins. It is true that they may not occur in optimum proportions in any one candy type, but to expect that they should is seeking Utopia, which is rarely if ever achieved.

The following images appeared in the Confectioner’s Journal in 1943, two years after the United States joined WWII. Involvement in the war affected the daily lives of all Americans. Food was rationed; commodities like sugar and coffee were not longer easily accessible through the local grocer. The candy industry, too, felt the impact of war. Not only were many ingredients used by confectioners now scarce, but candy, considered a non-essential component of a healthy diet, found itself an easy candidate for Americans seeking to eliminate all unnecessary foods from their plates. The article and advertisements below argue for candy’s importance, claiming it a useful addition to the human diet and highlighting its presence in military rations.

“Candy’s Place in the Diet,” describes the nutritional value of various candy types (e.g. hard candy, fudge types etc.) and aims to show that “candy is a good and wholesome food” which “should have its niche in the dietary structure.” Interestingly, the Editor’s Note which prefaces the piece claims the article “contains data confectioners will find useful in ‘selling’ their industry.”

“Candy’s Place in the Diet,” an article published in the June 1943 issue of Confectioner’s Journal, explains the nutritional benefits of various types or candy. 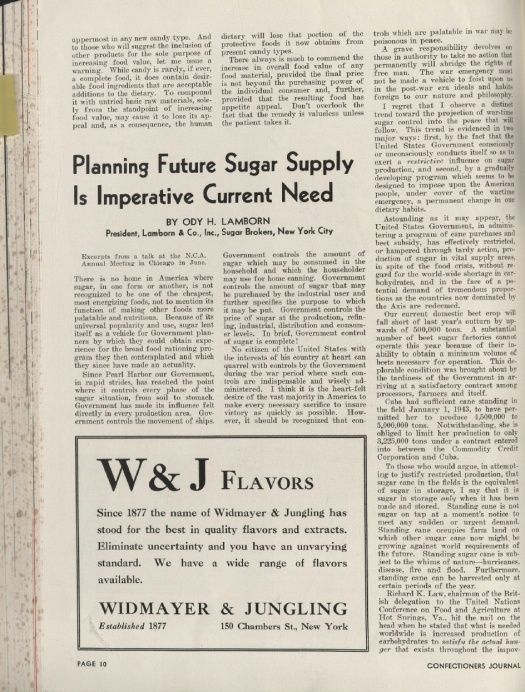 “Candy’s Place in the Diet” continued.

“Chocolate is a fighting food!” This announcement from the Confectioner’s Journal informs civilians of new restrictions and warns them of shortages of their favorite treats. In addition to the rationing of essential ingredients in candy bar manufacturing, many candy bars were sent overseas as part of soliders’ D-Ration packs. 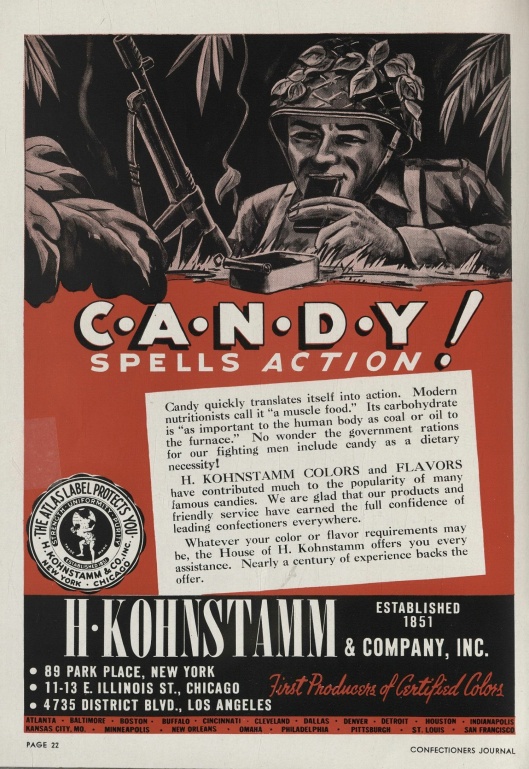 This advertisement for H. Kohnstam, a manufacturing for food dyes and flavors, also portrays candy as an essential part of the solider’s daily diet. From Confectioner’s Journal.