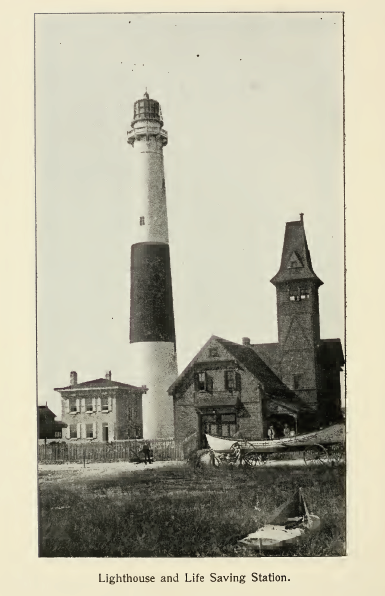 For many years Dr. Jonathan Pitney (the same guy who convinced everyone that Absecon Island was a viable resort location) tried to get a lighthouse built on the island. The island and its lack of illumination was the cause of numerous shipwrecks throughout the years. Eventually, after enough campaigning and written pleas to Congressmen, Pitney’s lighthouse received $35,000 in funding and on January 1857 the lighthouse beamed for the very first time. Standing 167 feet tall and with lights visible 20 miles out into sea, the lighthouse was open, free of charge to excursionists and became an amusement itself. According to an 1884 shopping guide to Atlantic City (which can be viewed online here at the Library of Congress website), the lighthouse was open for visitors 9am to 12m. Today, the lighthouse still stands and continues to be visited by Atlantic City tourists.

A postcard circa 1900 featuring the Absecon Lighthouse and inscription. Courtesy of New York Public Library.

Another postcard of the light house from around 1913. From Wikimedia Commons.